A.C. Flora head boys tennis coach Amy Martin and her young flock of Falcons dominated their first two matches in the boys Class 4A state tennis playoffs. Then they survived a battle with Daniel on the road for the Upper State championship showing their toughness and mental fortitude, but on Saturday, May 11 at the state championship match at the Cayce Tennis Center, the Falcons ran into a buzzsaw in the form of the Myrtle Beach Seahawks.

The Seahawks were not only a very talented and veteran group steeped in the tradition of nine previous state titles, but they were playing for their longtime coach, Rivers Lynch, who passed away unexpectedly early in the playoffs. Two of the coach’s grandchildren are on the team in Rivers Cahill at No. 1 singles and John Ed Cahill at No. 3.

“This Myrtle Beach team was not going to lose,” Martin said. “ We all have to face some very difficult times in life; they unfortunately, had to do it during the playoffs. I am sure it was a very bittersweet victory, in that they were playing for their coach, their mentor, and for several, their grandfather. They brought a huge portion of Horry County to cheer them on. Rivers would have been very proud of them!” 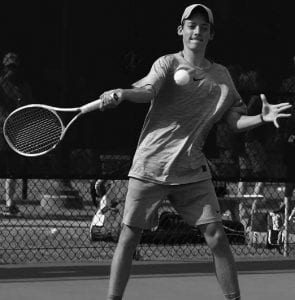 Facing that was a tall task for anyone, but Martin’s team consisted of one senior in No. 2 Alex Echols, no juniors, six sophomores, a freshman, and a couple of eighth graders. The result was a 6- 0 victory for Myrtle Beach.

Then Echols, the lone A.C. Flora upper classman, fell behind 4-1 in each of the first two sets eventually falling to Josh Wallen 6-2, 6-1.

Sophomore William Overdyke then fell at No. 4 singles to Myrtle Beach’s Robert Warstler 6-1, 6-0 leaving John Edward Cahill to clinch the match for the Seahawks at No. 3 singles with a 6-1, 6-2 victory over another Falcon sophomore, Rick Hewitt. 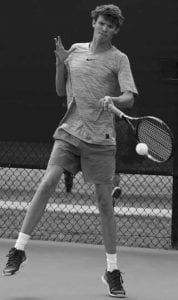 A.C. Flora’s Alex Echols returns a serve in his No. 2 singles match against Myrtle Beach’s Josh Wallen. Echols was the only senior on the team. Head coach Amy Martin said of him, “He stepped up to the challenge and helped this group come together as a team. Alex’s overall varsity record (2015-2019) is 65-10. He never quit and would drive his opponents crazy, just staying in the point one more shot!!

That left sophomore Michael Davis as the Falcons’ last man standing as he battled Rivers Cahill at No. 1 singles. Davis was down 4-3 in the first, but Cahill won the next two games to close out the set.

Davis then fell behind 5-2 in the second before battling back to tie the set at 5-5, but Cahill regained control taking the match 6-3, 7-5 to officially start Myrtle Beach’s celebration.

The good news for the Falcons, other than the Upper State championship and an amazing run, is that Martin’s 2014 team was in a very similar situation. That team had only one senior and was beaten 6-0 by Hilton Head in the state championship match. The next year A.C. Flora came back to beat Hilton Head 4-2 in the final to earn the crown.

“After graduating six out of 11 boys last spring, it was definitely a ‘new’ team,” Martin said. “And with losing only Alex this year and no juniors on the roster, next year could hopefully be like the 2015 season.

“It was a great year for tennis at A.C. Flora—with the girls winning it all and the boys being runner up. I’m not sure of any other schools around here who can make that claim. Both of these teams are made up of great kids; they aren’t just tennis players. They are Eagle Scouts, church leaders, Honor Society members, members of other sports teams, etc. It’s a win-win for all, and I am very proud and fortunate to be a part of it.”