You can’t keep a good duck down 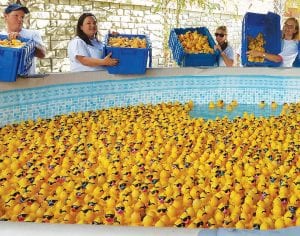 The ducks are loaded into the pool.

Even Hurricane Florence can’t keep a good duck down.

Despite all the obstacles the First Annual Soda City Duck Race encountered in its first year, the organizers pulled off the event—even though it wasn’t what they envisioned— 5,000 “adopted” rubber ducks racing down the Congaree River to raise money for Transitions Homeless Center.

Instead, because of dangerous conditions and high water on the river, the race was turned into a “pluck” in an inflatable pool at Stone River, just a few yards from where the race was to take place.

The class had purchased 126 ducks after Miller introduced the initiative in their morning meeting.

“On the second day of school, I read the class a book entitled I Wish You More,” said Miller. “Afterward, I asked students to write a letter to me answering the question, ‘What do you wish for?’I read each student’s letter and one mentioned her wish was for no one to be hungry. Another wrote she wished she could help the homeless. I realized, after just a couple of days of getting to know my class, I had some students with big hearts. That weekend, I came across the Duck Race event on Facebook. This gave me the idea maybe our class could get involved and help raise money for homeless/ hungry individuals in our community through Transitions. I presented the idea to the class and they loved it.” 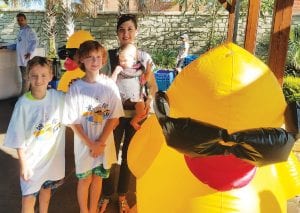 After the duck race organizers, NextHome Specialists, and Transitions learned of the students’ philanthropy, they invited several of the third graders to be the official “pluckers.” Daniel Holler and Seth Brower were enthusiastic participants, leaping into the pool and choosing the winning duck from amongst the 5,000 contenders.

The grand prize winner was Maurice Moore, who received $2,500. Second place of $1,000 was awarded to April Hutto and the third place prize of $500 went to Jake Orris.

But the biggest winner was Transitions Homeless Center, which will receive more than $15,000 to provide housing, meals, counseling, and life skills to help Columbia’s homeless population.

“We are thrilled to be the charity partner for the race, and we thank NextHome for its dedication and commitment in making this event a success, despite all the challenges associated with putting on a first-time event, as well as dealing with hurricane-related complications,” said Transitions Vice President of Advancement Elizabeth Igleheart. “We feel like this is a perfect partnership as NextHome’s focus is helping clients find their dream home, and we help our clients realize their dreams by finding a permanent home.”

Thomas Shumpert, the owner/broker of NextHome

Specialists, said the company is ready to do it all again next year.

“Despite all the challenges, we were thrilled to raised $15,000 for Transitions,” he said. “Stay tuned for next year.”

The NextHome has four offices in the South Carolina area and has grown to 28 agents since it started operating in 2016.

Transitions is a 260- bed facility located in downtown Columbia.

Since opening in 2011, Transitions has helped more than 2,077 residents transition back into the local community and into permanent housing.