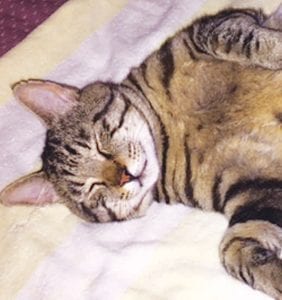 “Bob” the cat joined our family soon to be three years ago in September. After several episodes of “partying all night,” a trip to the vet changed his direction in life. At that time, he was estimated to be about two years old—a handsome young male in the prime of his life and he made use of it.

So, when Bob disappeared on May 15, my husband, Gene, and myself weren’t too concerned until supper time when he didn’t show up for his favorite of “shrimp and fish stew.”

And so the concern turned into worry, and worry turned into an all-out search. We looked everywhere, under the neighbor’s house, a favorite hide-out, up and down the road, tromping through the woods, calling local vets, scanning Facebook, Humane Society, and yes, we prayed daily for his return. No Bob to be found.

Our senior felines, Smokey and B.J. were heard to say, “serves him right.”

Forward to June 1, Gene reported that something was going on in our parked fifth-wheel camper; the blinds were in shreds.

Well, who should appear but Bob the cat!

How did he get in there?

I remember going in there looking for towels, but sure don’t remember seeing him anywhere around, but I guess he followed me out there. Approximately two and a half weeks without food or water.

His “meow” had dried up due to dehydration and he is a real talker, so probably cried a lot, so had we.

Bob is home now and getting the royal treatment and gets all the “Bob juice” he wants. Yes, we had looked in there, why he didn’t come out then, we don’t know, we had looked everywhere, believe me.

Bob was blessed and so were we to find him when we did and we are now very, very careful to check the area where we are before leaving it.