Vikings down Cavaliers in four 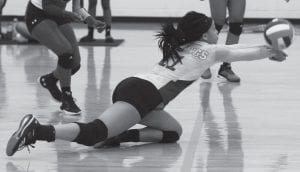 Spring Valley’s Angel White gets a dig against Richland Northeast.

The Vikings jumped out to an 8-1 lead in the first set with two aces from Williams and several net violations from Richland Northeast. The Cavaliers clawed back getting three aces from Gainey and a kill from Liberty Moyd to close the gap to 13-12, but after a timeout, the Vikings regained control.

Murria got a couple of touch winners, Williams collected another ace, and Richardson earned a kill to push the lead to 19-12. Murria added another kill, and Taylor had a two winners to close out the set for Spring Valley at 25-15.

The Cavaliers dropped the first two points of the second set but battled back to take a 5-4 lead. A couple of kills from Taylor and Pitt helped the Vikings regain the lead at 8-5, but a kill from Gainey and an ace from Montgomery tied it at 10-10.

The set stayed close until Montgomery rattled off five aces for Richland Northeast to push the Cavalier advantage to 22- 16. Spring Valley then claimed seven of the next eight points with a kill and a touch winner from Richardson and a couple of aces from Williams to tie it at 23- 23, but two straight Viking mistakes gave Richland Northeast the set.

The Cavaliers jumped out to a 5-1 lead in the third set behind the serving of Gainey, but the Vikings responded with a 16-4 run getting three kills each from Richardson and Pitt to go with a kill, block, and touch winner from Murria. 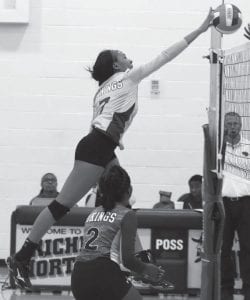 Richland Northeast regained momentum and took a 21-20 lead with a dig winner from Calan Watkins, two kills from Crout, and three aces from the Cavaliers’ other sophomore captain, Amiri Mason. However, the Vikings bounced back with kills from Pitt and Taylor, and Angel White’s ace won it at 25-21.

Once again, the Cavaliers came out swinging early to take a 9-1 lead in the fourth set, and once again, Spring Valley fought back getting kills from Taylor and White to go with two aces each from Mia Wooden and White to tie the set at 11-11.

Richland Northeast responded with a pair of aces from Crout and a winner from Montgomery to push the lead to 15-11, but the Vikings got a kill and a couple of aces from Taylor and a touch winner from Pitt to lead 16-15.

The teams battled back and forth with Spring Valley holding a 23- 22 advantage after Mason’s service winner for the Cavaliers, but Pitt put the set and match away with two kills.