Here’s a plant-yes, a cactus-that doesn’t seem to have many secrets. It is stark and obvious, all year long: massive, succulent pads foreboding plenty of spiny torment with marvelous summer flowers and bright red fruits.

It grows now in just about all warm parts of the US and is pictured here in my neighborhood in Columbia. It forms something of a shrub, although there really aren’t any true leaves to see. Fleshy pads are actually modified stems. The eye-like dots on the pads represent nodes, much like the eyes on an Irish potato. Spines (potentially dangerous) are sometimes present at the nodes. Otherwise, bundles of tiny, almost microscopic, modified plant hairs will be found in clusters at the nodes. These tiny hairs, or glochids, are also potential problem. A cactus pad without spines should still be handled with great care and sturdy gloves, as the glochids will dig themselves into skin and can be very irritating. 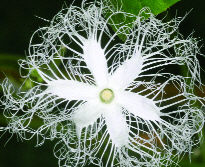 This is just about the easiest plant there is to grow. All you need is one of the pads, buried partially into the ground. In really warm areas, the plants sometimes form a small tree featuring a distinct trunk. The plants seem to be able to tolerate winter temperatures into the 20s but not below that.

All cacti are flowering plants. The flowers of the mystery plant are extremely showy, bright yellow, featuring plenty of petals and lots of stamens and pollen. The flowers are followed by massive, egg-shaped, reddish fruits, technically berries, that have historically been called tunas. Some cultivated versions have yellow fruits.

These berries are filled with deep red pulp and a considerable number of seeds. The juice is highly prized as a healthful beverage. The pads are also used as a food source in many parts of Latin America and are commonly seen now in well- stocked supermarkets, sometimes with the glochids burned away with a blow- torch. Generally, these pads may be skinned and then sliced and sauted. There are plenty of recipes for both fruits and pads.

Native "prickly pear" cacti occur in just about every state in the continental US. This species, though, based on molecular evidence, is probably native to central Mexico. Evidence suggests it was used as an economic crop well before Columbus showed up in the New World, and it is likely he was the one who introduced it to Europe. Presently, it is common all over the globe.

Dr. John Nelson is the curator of the USC Herbarium.

To learn more about the Herbarium, call him at