At lunch, Monday, April 24, in the Williams-Brice End Zone, USC football coach Steve Spurrier led the speakers’ schedule before the International Downtown Association. Headquartered in Washington, DC, the IDA is a world leader and champion for vital livable urban centers. The IDA is pre-eminent among downtown organizations, business improvement districts, and downtown professionals. The IDA held its spring conference last weekend in Columbia, and Monday’s lunch was the closing function. The most recent spring conferences were held in Memphis, Houston, and Norfolk. Next fall’s conference is set for Portland, Ore., and the next year, New York City.

Columbia is the smallest town ever to serve as host to an IDA conference mostly thanks to Columbia’s City Center Partnership and its director Matt Kennell. The delegates were suitably impressed, and they left Monday to spread the word among their organizations in cities all over North America. 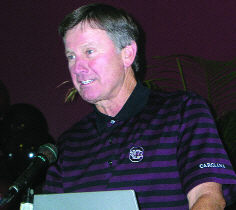 Coach Spurrier explained he was not in a re-building program, but leading a football team looking for a national championship and a winning tradition. He told the crowd this building program is something never done before.

Dr. Andrew Sorensen, president of USC, walked the End Zone lunch crowd through Innovista, the recently disclosed construction plans between Assembly Street and the Congaree River, all $1.2 billion of it. He allowed for a 15-year completion period after over $100 million in infrastructure improvements.

The master plan was guided by the university and designed by 50-year-old Sasaki Associates of Boston. The plan has two main streets, Huger for north/south orientation and Greene for east/west, extending to the proposed amphitheater on the former Guignard property next to the Congaree River. Williams Street is being rediscovered and extended to connect Blossom Street and Gervais Street through the new park. South of Blossom Street is the riverside site of the new USC baseball stadium.

Senate Street, where it meets the river, may well rediscover its ferry. The Senate Street ferry can connect with the west bank as it did in the late 18th century when Columbia was just getting started.

Sasaki designed Sea Pines Plantation and its Harbour Town at Hilton Head. Waterfront Park in Charleston is another inspired Sasaki effort. Elsewhere, Sasaki can proudly point to riverfront parks in Indianapolis and in Wheeling, W.Va., but neither is as large as Columbia’s proposed riverbank public space on what is still called Guignard Park.