Rolling down the river… 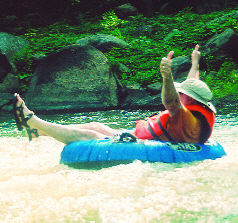 Michael Mayo considers the Saluda and Congaree Rivers as his playground. He has kayaked the beautiful Saluda as far back as he can remember as he and his sister followed their father Johnny Mayo through the currents, dodging rocks, and catching eddies in rapids with names like Maytag, Mill Race, Ocean Boulevard, and Shandon. Michael has always thought there should be an easy way to share some of the beautiful scenery of the Three Rivers. Canoeing and kayaking need some skills to move from point A to point B, but the single person float is as simplistic a craft as there is… a floating tube. He began renting tubes in the spring. Labor Day is the last day he will be renting, but he will return in May.