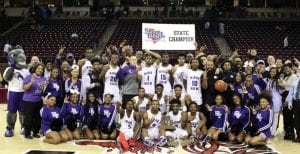 The Ridge View Blazers used flash, in the way of dunks, substance, in the way of Malcolm Wilson’s seven blocks, and a 17-9 third quarter to pull away from the Wilson Tigers in a 65-52 win to repeat as 4A Boys Basketball State Champions Saturday, March 2 at the Colonial Life Arena.

“Length and athleticism was the big key,” Ridge View head coach Yerrick Stoneman said. “We threw some lob plays because we knew we could go over the top of the zone. Our kids executed extremely well. We’re definitely going to miss Malcolm. He alters so many shots, blocks so many shots, and gets so many rebounds; he allows our guards to play the way we like to play.”

Wilson put up a fight in the first quarter. Two layups and a slam dunk by Darius Boatwright put the Tigers in front 6-4. Then it was Ridge View’s turn to give the crowd something to cheer about, and it did with a reverse layup from Cincere Scott and two slam dunks by Ja’von Benson as the Blazers claimed a 10-8 edge. A layup by Allen Williamson and a free throw from Walyn Napper made the score 11-10 in favor of Ridge View at the end of the first quarter. 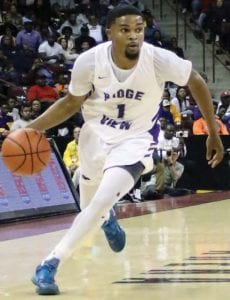 Ridge View’s Walyn Napper drives to the lane against Wilson.

Another slam dunk from Benson, a 3-pointer from JaVon Anderson, and a bank shot from Napper helped the Blazers open up an 18-12 lead early in the second quarter. Wilson responded with a 3-pointer by Boatwright and two free throws from Maine Gibson to trim the deficit to one point. Ridge View stormed back with a layup from Napper and a running floater and layup from Scott to push the lead to 24- 17.

A bucket by Wilson’s DeShawn Brackett made it a five-point game, but Scott nailed a 3-pointer and Patrick Jenkins converted a layup as the Ridge View lead grew to 29-19.

A jumper from Ziohn Brown and a free throw from Williamson gave Wilson some momentum, before a 3-pointer at the buzzer from Anderson gave the Blazers a 32-22 halftime lead.

Ridge View built off the momentum in the third quarter starting with a slam dunk and put back by Benson and a slam by Wilson making the score 38-22. The Tigers were able to get the deficit to 13 twice, before a deep 3-pointer by Scott, a bank shot by Crosby Harris-James, and a putback layup by Anderson expanded the lead to 47-27. Brackett knocked down a pair of free throws for Wilson, Napper hit a layup for Ridge View, and Boatwright knocked down a jumper for Wilson setting the score at 49-31 at the end of the third quarter. 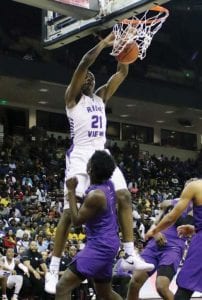 The Blazers’ lead stayed around 17 for the early parts of the final quarter until Napper knocked down a layup and bank shot, and Scott converted a pair of free throws to grow the Ridge View advantage to 60-37.

The Tigers ended the game on a 15-5 run, but the deficit was too far out of reach. Napper and Xavier Major added scores for Ridge View.

“I give a lot of credit to Wilson for allowing that to happen,” Stoneman said of Major’s fourth quarter score. The senior forward has autism. “I appreciate what he has done. I tell the kids if they want X in they have to do something. X is very special to the program in many ways. They see the work he puts in, and he was able to get a reward for the work he put in.”

Ridge View finishes the season with a 25-7 record. 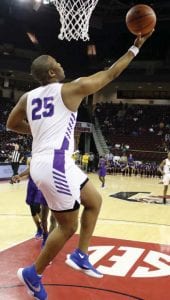