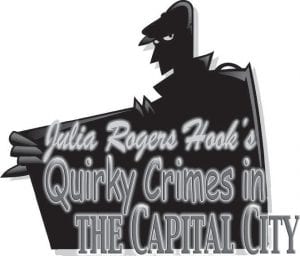 tForest Drive: A woman was arrested at 12:30 a.m. Monday after she apparently broke into a drug store and was caught on the surveillance cameras stealing merchandise. The store alarm alerted police, and when officers arrived, they saw a person leaving through the front door. The video showed the woman opening the door around 11:30 p.m. Sunday night and walking up and down the aisles as if she were shopping. She chose a pair of $15 leggings, and after looking around the empty store, she stuffed them in her purse. She then left the premises and was spotted a short time later at a nearby grocery store parking lot. Since she matched the description from the drug store and because she was loitering in the lot, she was detained by the officers and questioned. She cooperated with the officers and gave them her name and identification. They discovered she had a previous shoplifting conviction, and she readily admitted she was in the store but told officers she had “no idea” the store was closed. She opened her purse and took out the leggings along with a box of panty liners, a toothbrush, toothpaste, mouthwash, and a pack of sandwich ham. While the drug store employees recognized all the sundry items from their store, they said they didn’t sell the ham. A grocery store employee confirmed the ham came from their store. All the stolen merchandise was retrieved, and the woman was charged with her second shoplifting offense and taken to jail.

tForest Drive: A man and a woman were arrested at 2:30 a.m. Friday after patrol officers saw them parked behind a closed restaurant. When the officers approached the car, they found the woman inside, but the man was crouched down with his pants around his knees. They ran the car’s tags and found it to be reported stolen, so the duo was placed under arrest. During the arrest procedure, the woman was asked if she had any weapons or sharp objects. She pulled up her shirt and bra, and a hypodermic needle fell out. She said she was carrying the needle for the man because he “wanted to shoot up some heroin.” The man was lethargic, sweaty and clammy, and his pupils were very constricted. Fearing he was in some sort of drug distress, the officers called EMS. When the ambulance got there, they decided to take both of the suspects to the emergency room to be checked out. While they were checking the woman’s vital signs, she asked them if she could “have a little something” for anxiety, but they said no. Once the couple had been evaluated and pronounced in good health, both were charged with auto theft and for having drug paraphernalia on their person. A computer check determined the car belonged to the woman’s roommate, so the stolen car charges were dropped to taking the car without the owner’s permission.

tTwo Notch Road: A woman called police at noon Thursday after she said her ex-husband’s new girlfriend was harassing her at work. The woman told officers she had no idea why, but the girlfriend was constantly calling her at work and leaving hateful and offensive messages on her voice mail or with her directly. She said the girlfriend called earlier in the week on a day she was off. Instead of hanging up, she said the girlfriend left a message for her full of obscene language with one of the woman’s co-workers. The woman said it was harassment and embarrassing, and she wanted it to stop. She said she was filing reports with several police departments as the girlfriend lived in Columbia and Richland County, and her job was in Forest Acres.

tCovenant Road: A man was arrested at noon Friday after the manager of a discount store called police and said he had stolen feminine hygiene products from the store. The caller told officers the man had taken several boxes and packages of the products and stuffed them into his backpack, then left the store without paying. Police saw a man fitting the store employee’s description walking down a nearby street, so they called out to him to stop and talk. The man yelled out an obscene phrase to the officers and broke into a run. The officers called another car, gave them the description, and directions the man was running. Between the two cars, the man was found but still wouldn’t stop. One officer used his taser, but the electrical charges hit the suspect’s book bag, and he got away by ducking into some woods.

tAugusta Road: A police officer was called to a grocery store at 1 p.m. Friday because a man was bothering customers in the parking lot as they entered the store. The 38-year-old was still approaching customers when the officer came up. The officer watched as he would go up to various people on their way into the store, have a brief conversation, and then walk away. When the officer confronted the man about what he was doing, he said he was just making conversation, but then with further questioning, the man explained he “had fallen on hard times” and was asking for money. He said when several people turned him down for a handout, he then started to ask people if he could pay for their groceries with his state-issued EBT card and have them reimburse him with cash. The officer asked for his identification and then ran it through the computer. A warrant came back out of Cayce where he had also been panhandling and then trespassed from a business. He had been arrested for returning to the business after being trespassed. He was then charged with a second offense of panhandling and arrested. He was additionally trespassed from the grocery store as well.