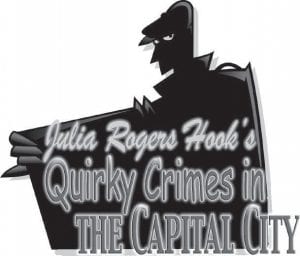 Trenholm Road: A woman went into the police station at noon Friday to turn in a handgun she said belonged to her 73-year-old husband. The woman told officers her husband had ordered the weapon and received it in the mail. She said she wasn’t comfortable with him having it in the home, and she felt they “didn’t need a gun.” An officer ran the gun’s serial numbers through the computer and discovered it had been reported stolen. They will turn the firearm over to the South Carolina Law Enforcement (SLED) for further investigation.

Spring Branch Road: A man and woman were detained for questioning at 1:00 p.m. Wednesday after the male driver was pulled over for turning without signaling. As the officer approached the car, he smelled marijuana, and the duo had obviously been smoking the drug. The officer asked who owned the car, and the man said he did. He gave full consent for the officer to search the car, and during the search, although no more marijuana was found, the officer did discover two digital scales with a leafy residue on them. It wasn’t determined if the couple would be charged with possession as no actual marijuana was in the car, but they could be charged with having drug paraphernalia in the vehicle.

Trenholm Road: A woman who is a health-care giver went to the police station at 2 p.m. Tuesday after she said two of her co- workers had assaulted her. The 41-year-old woman told the investigating officer while she was at work, “out of the blue” one male coworker walked up behind her and kicked her in the back of her knees, nearly knocking her down. She said a short time later, another male worker did the same thing, and she had no idea why or what caused them to attack her. She also told the officer one of the men who had kicked her was now following her around “constantly,” and it’s causing her to be “very uncomfortable.” She wasn’t sure about prosecution and said she was mainly reporting the incident, so there would be a report, and she would welcome any advice police could give her.

Forest Drive: A woman who was working at a convenience store called police at 11 p.m. Wednesday after she said an underage girl tried to buy beer with a fake ID. The store clerk told officers the girl came in and got the beer and presented a Florida driver’s license that said she was born in 1994, which would make her exactly 21-years-old. The clerk said she questioned the license as the girl didn’t look “anywhere near 21.” The clerk said she asked the girl if the license was fake, which seemed to startle her. She then said she told the girl she could “check with the police” to verify the authenticity of the license, and at that point, she said the girl burst into tears and ran out of the store, leaving the license behind.

Two Notch Road: A woman was arrested at 11 p. m. Thursday after she sped past a patrol officer doing 15 mph over the posted speed limit. A traffic stop ensued, and a computer check of the woman’s license revealed the woman was driving on a suspended license that night. The computer also said the license had been suspended for her failure to pay prior speeding tickets. She was cited for speeding and then arrested for driving on a suspended license.

Augusta Road: A man was arrested at 11 a.m. Friday after he refused to obey a police order to leave the grounds of a business where he was sleeping. The manager called police and told them he wanted the 27-year-old man trespassed and removed from the property as he wasn’t good for business. When the officers arrived, they initially tried to wake the man, but he gruffly told them to “leave me alone.” The officers then informed the man the business manager wanted him gone, so he had to leave the premises. The man informed the officers he “had a headache” and told them to go away. They again explained they couldn’t just “go away,” and they were going to formally trespass him from the grounds. At that point, the man again told them to leave him alone and began to count, much like a parent would when telling a child to do something. “One, two, three…” the man said to the officers. They asked him what he thought he was doing, and he told them “you’ll see.” The officers told the man if he didn’t leave, he was going to be arrested, and the man told them to “go ahead and arrest me then because I’m not going to move.” They charged the man with disorderly conduct and took him to jail.

12th Street: Police arrested a man at 3 p.m. Thursday after he caused a scene at West Columbia headquarters. The man showed up and asked to speak to an officer. When the officer came out to speak with the man, the man began to tell him how he and his wife were having relationship problems, and now the wife was apparently moving out and taking things out of the home he didn’t want her to have. The officer pointed out if the two were married, any property would become mutual possessions. He was also advised to go to the local magistrate to intervene and work out a plan for splitting the couple’s belongings. At that point, the man became extremely irate and belligerent towards the officer. He was loud enough that any bystanders could hear him, even children. The officer took the man outside and again explained he would need to see a magistrate in order to come to an agreement with his wife regarding their property. The officer also again informed the man arbitration between spouses wasn’t a police matter. The man began yelling again, this time swearing and using obscene language and again in front of other bystanders. Since he refused to calm down and discuss the situation rationally and since his foul language could be heard by nearby children, he was charged with disorderly conduct and taken to jail.