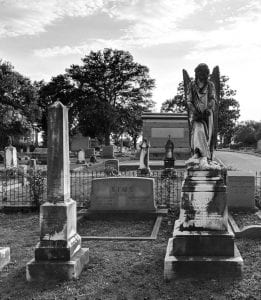 In honor of one of Historic Columbia’s most popular tours returning next week, here are some highlights of just a few of the countless interesting stories hidden in the historic Elmwood Cemetery.

James Henley Thornwell was a professor at South Carolina College who joined the faculty in 1837 and replaced William Campbell Preston as the institution’s president.

Thornwell’s term is best remembered for the “Great Biscuit Rebellion of 1852” in which students and faculty clashed over compulsory dining rules and the almost 40 percent of the student body quit school in protest.

In November 1854, Thornwell resigned his presidency to accept a chair position at the Columbia Theological Seminary, today’s Robert Mills House.

Just two years after Thornwell’s move to the seminary, this distinguished teacher and administrator experienced a personal tragedy as his son, Jackson Witherspoon, died at just 8 years old. His plot marked with a motif of a lamb bears the inscription, “The lamb is a fit emblem of this dear child who delighted to call himself his mother’s lamb.”

He was a professor at the Columbia Theological Seminary and served as a chaplain in the 23rd South Carolina Infantry during the Civil War. The 23rd SC Infantry fought in the Battle of 2nd Manassas where they suffered 68 percent losses. The regiment also incurred heavy losses at the Battle of Sharpsburg (Antietam) and at Petersburg, Virginia at the Battle of the Crater.

His marker bears the distinct motif of a Bible on a pulpit. His marker is inscribed, “After patiently enduring he obtained the promise, Hebrews 6.15.”

Reverend Girardeau had two grandsons who served in World War I, Hearne Girardeau Jr. in the American Ambulance Service attached to the Italian Army, and Charles J. Girardeau, his younger brother, who saw action at the Battle of Champagne and around the Verdun front. Both brothers died in their 30s and were buried next to their grandfather in Elmwood Cemetery.

Today, many male and female veterans are buried in Elmwood Cemetery. The cemetery has set aside a portion of land for a veteran’s section to allow family members a National Cemetery like atmosphere somewhere closer than Florence or Beaufort.

Find out more about these and other fascinating Columbians at Historic

Columbia’s popular Cemetery Tours which return on Thursday, April 11 starting at 7:30 p.m. at the historic Elmwood Cemetery. Offered on the second Thursday of each month, April through September, Historic Columbia’s Cemetery Tours bring 160 years of history to life.

Grab a flashlight and discover centuries of stories etched in stone on the markers and headstones found within Elmwood Cemetery’s acres of carefully planned grounds.