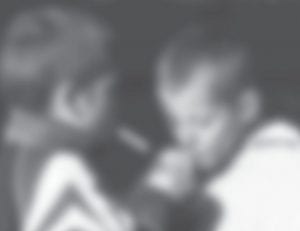 The temptation was too much…It eventually killed him.

(Note: This series is from my father’s memoirs I found long after his death.)

My classmate Bobby Harrington lived five miles outside Greeleyville on a farm. When I was about 11 years old, Papa gave me permission to go with Bobby on the school bus Friday afternoon and come back home when they came to church on Sunday.

Bobby’s daddy ran a small store next to his house and was a very successful tobacco farmer. He let me and Bobby help on his farm during reaping season. I rode a mule on the drag which was a very large box the mule would pull between rows as men plucked the tobacco leaves and put them in the box. Bobby tied up the tobacco leaves which were put in the curing barn and graded later.

Whenever I visited Bobby, he had to keep the store part of the time. One day we decided to try smoking cigarettes that were sold in the store.

We took a pack of Camels and some matches, closed the store, and went into the woods. We sat on a log and proceeded to smoke 20 cigarettes, 10 each. We got sick as dogs, and on top of that we had red bugs from head to foot. How, after that, I got the habit of smoking I don’t know.

[ Note: My father was a chain smoker. He always had a pack of cigarettes in his shirt pocket, but Momma never allowed him to smoke at home. She said it “smelled up the house.” He did, however, smoke everywhere else… except at church… and he developed emphysema. The last time he smoked was at a Montgomery Family Christmas party where he passed out, and we had to call an ambulance. He had developed chronic emphysema and was told he had to quit smoking. But…the temptation was too much. He continued to sneak a cigarette whenever he could, and it eventually killed him.]

Next Week: My First Gun