No repeat for the Lady Bearcats 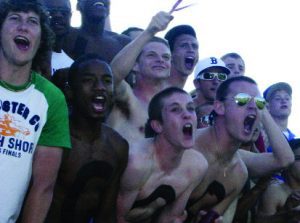 The Brookland-Cayce fans are arguably the best in girls high school soccer. These guys were just part of a large contingent at this year’s state championship game.

The Brookland-Cayce Bearcats’ drive for a second straight title came to a screeching halt Friday, May 12, 2006, at USC’s Stone Stadium thanks to the Riverside Lady Warriors.

Hobbled by injuries to seniors Emily Logan Setzler and Ashton Tatum, and sophomore Cayla Fralick, the Bearcats gave up two goals by Riverside’s Sarah Jacobs within ten minutes of each other early in the first half.

The second half got a little nasty and the Bearcats seemed to find their winning edge when Emily Defrance headed a shot into the back of the net with 24:16 remaining in the game. That got the B-C fans going and prompted the referee to issue each coach a warning. Then Riverside’s Renee Ballew was issued a yellow card and had to be pulled away from the referee. 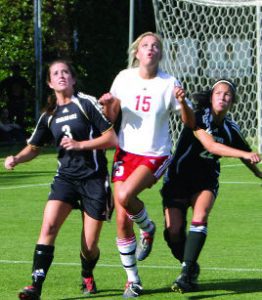 While the Bearcats seem to take the momentum, they could not muster another shot after Defrance’s header.