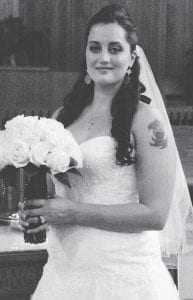 The bride is the daughter of Pamela Elliott of Columbia. She is the granddaughter of the late Doris Faye English of Dillon, South Carolina.

The groom is the son of David and Sharon Chapman of Sutton, West Virginia.

The bride was given in marriage by her mother. Maid of honor was the bride’s sister, Nicole McDonald of Columbia

The music included Sally’s Song from Nightmare Before Christmas. The couple stayed in Columbia for their honeymoon.