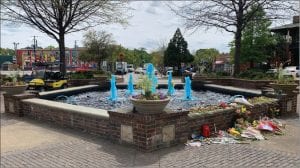 Flowers and other memorials remain at the Five Points Fountain in memory of USC student Samantha Josephson, who was kidnapped from Five Points and later killed.

The kidnapping and later murder of Samantha Josephson, a USC student, has reignited the discussion of safety in the Five Points hospitality district while shining light on needed regulations for Uber.

Two politicians have already made sure the moment doesn’t pass without some effort for change. Representative Seth Rose has proposed a bill named the Samantha L. Josephson Ridesharing Act. The bill calls for ridesharing drivers to display illuminated signs on their vehicles while in-service and turn it off when not in service.

Rose began working on this bill with the goal of better identifying such vehicles.

“There is no magic legislation to eliminate a similar situation, but there are things that can be done to make tragedies like this less likely,” Rose said.

On the Uber app there is already information regarding the vehicle’s license plate number and a picture of the driver. The driver should also know the customer’s name.

However, Rose is concerned about the customer’s who may have had too much to drink to be able to follow those measures.

Through his research, Rose has learned about Beacon Technology which allows an Uber vehicle to have a color light that matches the display on the customer’s phone.

He has also expressed interest in looking at front license plates for rideshare vehicles, although it would come at a cost.

Rose was able to beat the deadline for bills to reach the Senate, which was Wednesday, April 10, by having it voted on by the House on Tuesday. It passed by a vote of 99–1 and is now on to the Senate, meaning it could become law this year.

It is a bill supported by many of those in Five Points, including Five Points Association President Tim Smith.

While Rose is working on the state level, Columbia City Councilman Moe Baddourah is offering a meeting Tuesday, April 16 at the Lourie Center beginning at 5:30 p.m.

“I want to give the public an opportunity to offer their opinions and suggestions,” Baddourah said. “People have strong feelings about safety issues, especially after the tragedy. They have a lot of ideas but not enough avenues for sharing those ideas with their public officials.”

Baddourah believes there will also be a presentation on the safety policies currently in place as well as new policy ideas for rideshare services.

Smith said a representative from the association will be at the meeting. Baddourah has also heard from business owners.

“The Five Points businesses I’ve spoken with seem receptive to reasonable public safety reforms,” Baddourah said. “After all, they want a safe Five Points, too.”

While Rose has decided to try something new in making Five Points safer, it has yet to be determined what, if anything, city council will do. However, Baddourah believes there are questions that need to be answered in terms of rideshare safety.

Baddourah also wants to have a discussion about surveillance cameras. While he credits the use of cameras for catching Nathaniel Rowland, Baddourah wonders if more should be added in Five Points and if some should be in the Vista.

“I think it’s possible to come up with policies that improve safety the businesses can live with,” Baddourah said. “It starts with a dialogue among the stake-holders, which is largely what this meeting is for. We need to get that conversation started.”

Along with passage of the Samantha L. Josephson Ridesharing Act, Rose is working with Senator Richard “Dick” Harpootlian to reduce a stretch of Harden Street, from Blossom Street to the Five Points Fountain, from four lanes to two. He would also like to see designated pick up areas and a good police presence.

“I don’t see this as a Columbia or a University of South Carolina issue,” Rose said. “I see this as an industry that is fairly new and is not properly regulated to ensure safety. It is incumbent on us to put safety measures in place to protect our citizens.