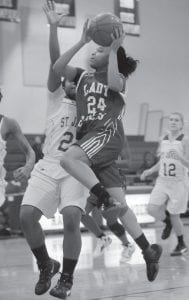 The St. James Lady Sharks were too much for the Airport Lady Eagles beating them 46-19 in the second round of the Highlander Classic Wednesday, December 28.

“We just have to learn how to score. We play good on defense, but we just haven’t learned how to execute on offense,” Airport coach Trey Wallace said.

The leading scorer for the Lady Eagles was Terri Strickland with seven points. Along with problems scoring, turnovers and traveling violatios put the Lady Eagles in a hole they could not escape from.

By the time Mikhelle Coburn made the Lady Eagles’ first basket of the game, just 3:20 remained in the opening quarter, and the Lady Eagles were behind 11-2. The only other points Airport scored in the half were two free throws by Strickland as Saint James took a 25-4 lead into halftime.

Buckets from Strickland and Kelly Murray gave Airport a little momentum starting the third quarter. Later, Strickland scored again for the Lady Eagles, along with Kalila Williams, but they still trailed by double digits at the end of the quarter.

The Eagles were able to continue their scoring ways in the fourth. Points from Strickland, Coburn, and Williams helped out Airport but were not enough as St. James won comfortably.

“The biggest thing is the youngest players are getting experience. That’s what we are lacking. We have to have players step up,” Wallace said.