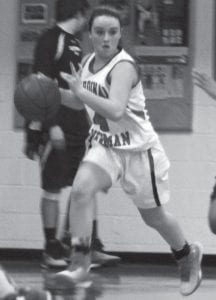 Mya Parter seemingly scored at will for the Lady Highlanders driving to the basket time after time eventually racking up a game-high 21 points. She scored six in the first quarter alone to guide Heathwood to a 12-10 lead.

Dobbs scored on a fast break at the 6:30 mark of the second quarter, and Mary Emma Dayhuff got a layup to give the Lady Cardinals their first lead of the game. Parter then put Heathwood back on top at 15-14 with a conventional 3-point play. Dobbs answered with a drive, but Rachel Whittaker got fouled as she downed a layup and made the subsequent free throw to give the Lady Highlanders an 18-16 advantage. Parter then led a 6-2 run with four more points, and Heathwood led 24-18 at halftime.

After Whittaker’s driving basket with just under three minutes remaining in the third, the Lady Highlanders had built a 28-23 cushion, but Regan Fosmire got a steal and a layup to start a 12-1 Cardinal Newman run. Back from injury, Madeline Schimmoeller came off the bench to convert on a conventional 3-point play. Fosmire drained two more layups, and Dobbs added a free throw and a jumper. 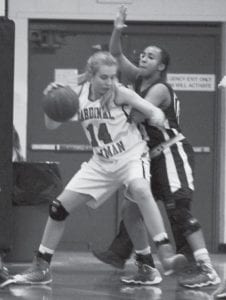 Heathwood cut the lead to 35-32 after a drive from Casey Glick and a free throw from Parter, but Sierra Bacon got the front end of a one-andone, and then got fouled as she made a layup. She drained the ensuing free throw, and the Lady Cardinal lead was 39-32.

After another driving layup from Bacon, and a couple of free throws from Dobbs, Cardinal led 43-34, but the Lady Highlanders did not quit. Parter hit two free throws, and Whittaker added one. Glick hit a jumper, and Parter drained a couple more free throws, and suddenly the Lady Cardinals were clinging to a 43-41 lead with 53.6 seconds remaining.

Heathwood had opportunities, but an over-and-back violation and a turnover to go with a couple of free throws from Dobbs gave Cardinal 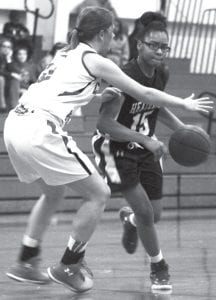 Bacon finished with 11 points for Cardinal Newman. Fosmire added eight. Dayhuff and Maria Cummings each got four, and Schimmoeller had three. Aufuldish hit a couple of free throws.