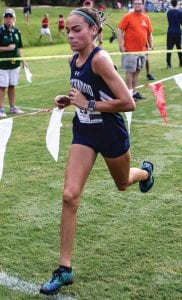 It’s very early in the season but with one race in the books, it looks like Heathwood Hall Highlander girls’ head coach Willis Ware may have found himself another gem.

Brooke Grice, Sydney Ellen, and most recently, Maryah Nasir, all won Skyhawk Invitational titles and at least one state championship each for Heathwood Hall. Enter Jais Ward. The Highlander seventh grader won Saturday’s (August 25) Skyhawk Invitational in a time of 19:24.83 beating out Aiken’s Victoria Colon- LaBorde by a little over 16 seconds. It was Ward’s first high school cross country meet, but she’s no stranger to competition taking fourth in the 1500 m race at the Junior Olympic National Meet this summer. She led the Highlanders to a third place team finish in this year’s invitational. Teammate Laela Kaplinger was 13th in a time of 21:04.55

Cardinal Newman’s Palmer Dayhuff took second on the boys’ side of the Skyhawk Invitational.

A total of 24 teams and 278 individuals placed on the girls’ side.

On the boys’ side, Cardinal Newman’s Palmer Dayhuff, the defending SCISA 3A state champion, finished second in a time of 17:17.13, just 12.58 seconds behind Porter Gaud’s Ben McElveen. Hammond’s Julian McCue, last year’s Skyhawk Invitational champion, took sixth in a time of 17:33.99. Dutch Fork’s Garrett Spangler was just behind McCue in a time of 17:39.66, and Dreher’s Levante Binion rounded out the top 10 in a time of 17:48.17.

Lancaster took the team title with 97 points. Dutch Fork was second with 150. A.C. Flora finished third led by Carlisle Kelly in 21st and Colin Mitchell in 22nd. The two were separated by just 0.31 seconds. 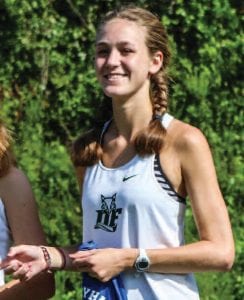 Dutch Fork’s Brianna Hartley finished eighth on the girls’ side of the Skyhawk Invitational.

Cardinal Newman was 12th, and Hammond was 14th.

A total of 24 teams and 348 individuals placed on the boys’ side. -Results via sc. milesplit.com 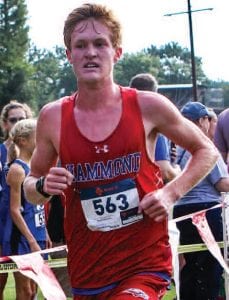