Gray Collegiate working to take the next step 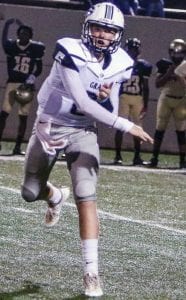 The 2017 season was a positive step forward for the Gray Collegiate Academy War Eagles and head coach Adam Holmes. In the fourth season of existence, Gray Collegiate posted its best record, 7-4, and hosted its first playoff game, a 28-18 loss to Cheraw. It was also the War Eagles’ first winning season.

Now Holmes wants his program to take the next step, win a region title and earn a No. 1 seed in the 2A playoffs. A three–point loss to Saluda halted those dreams last season.

Any success Gray has this season begins with quarterback Hunter Helms. The junior is getting a lot of looks from Division I universities after throwing for over 2,500 yards and more than 20 touchdowns as a sophomore. Holmes is looking for Helms to continue to develop.

Helms will have two playmakers in Josh Doctor and Kyser Samuel. Doctor stepped up for the War Eagles when Chylon Thomas went down last season with a hamstring injury. Doctor finished the 2017 season with over 700 yards receiving; Samuel had over 400 yards. 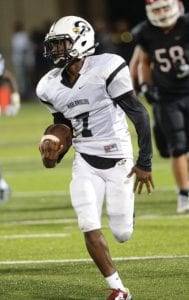 Josh Doctor could put up big stats in his senior year at Gray Collegiate as he teams up with quarterback Hunter Helms in the War Eagles offense.

Spencer Steverson is a possession receiver for Gray.

At running back, Gray returns Julian Jackson II. He didn’t start until Week 3, but was still able to produce over 800 yards on the ground.

Holmes will have to find answers along the offensive line. Tyler Lamar, Brendan Evans Grayson, and Caleb Moore all return. However, there are still two open spots where starters will have to be identified. Lamar and Moore will be the two tackles.

Grayson will also see time along the defensive line. He will team up with Dallas Corbitt, who comes over from Gray’s state championship-winning boys’ basketball team, along with Deshon Potts and Jakell Scott. Seth Kempfort will also battle for playing time.

The linebacker position took a big hit for the War Eagles in 2018 after the graduation of John Sloan II and Duncan Rivers. However, there is talent ready to fill the void. Arthur Albritton is a three- year starter who leads by example. Dominique Barksdale and Keisler are two players who shined on the junior varsity level moving up this year.

In the secondary, Kelvon Robinson returns after tearing his ACL in Week 4 in 2017. He will more than likely nail down one of the safety positions. Emmanuel Harley is also slated to start at one of the two corner spots, after amassing 50 tackles and two interceptions last season. Samuel, Doctor, and Steverson will likely be rotated at the other corner position.

Eric Anderson returns for another season as Gray’s kicker. Holmes wants Anderson to work on deeper kickoffs and continuing the consistency he showed last season on field goals.

While determining if Gray takes the next step or not depends on how the team performs in region play, there will be little doubt the team will be prepared by the time October rolls around. Through six non-region games, the War Eagles play 3- A Gilbert and Swansea, 4A Dreher, and 5A White Knoll. Gray also has two-time defending A state champion Lamar and an up- and- coming Oceanside Collegiate Academy team to face before opening up the region schedule with Columbia on October 5.

While former region champion Saluda and contender Fox Creek have moved on with realignment, Holmes is not expecting the competition to swoon any with region foes Columbia, Calhoun County, C.A. Johnson, and Eau Claire.

There will be plenty of challenges Holmes and Gray Collegiate face on the quest for a region championship. If the War Eagles are able to accomplish their goals, it is safe to assume they will be battled tested for the 2A playoffs.