Give peace a chance What to do when dogs are fighting 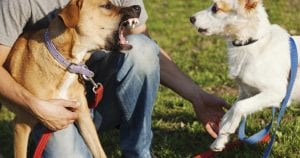 One trigger for dog fights in the home is fighting over human attention.

When I write the monthly training-related article for The Columbia Star, I try to think of topics that most dog owners can find useful, interesting, and educational. It seems lately I am getting a number of requests for help from people whose peaceful homes are being disrupted by fights between their own dogs.

This situation is distressing, and the fights can often result in serious injuries to one or both of the dogs and their owners when they try to break up the fights. Unfortunately, this is one of the most difficult behavior modification issues to address simply because the dogs live in the same home and are constantly in each other’s presence.

A scientific report released in the Journal of American Veterinary Medical Association and cited in the April 2014 issue of Psychology Today in an article by Stanley Coren, Ph.D., DSc., FRSC, addressed data related to “Aggression Between Dogs in the Same Household.” 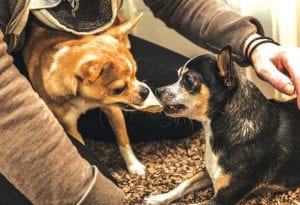 Pick up all objects such as toys or chewies that may trigger a fight.

The research team confirmed what trainers and veterinary behaviorists see: most (68 percent) fights by dogs in the same household involve female dogs. It is much less common to experience inter- dog aggression between male dogs.

Please note this does not mean all female dogs in a household will fight. However, if clients tell me they want to adopt a dog or a puppy, and they already have a female dog in the home, I strongly recommend they adopt a male dog rather than another female.

The study also found it is most often (74 percent) the younger dog that starts the fight and in 50 percent of the fights one or both of the dogs required veterinary care. Additionally, in 50 percent of the cases, the pairs had other behavioral issues such as separation anxiety, general anxiety, fearfulness, or phobias.

The risk factors for fighting, as determined by the study, include at least one dog that had lived in multiple households, one had been adopted after 12 weeks of age, and dogs from shelters and dogs purchased from pet stores (puppymill dogs). 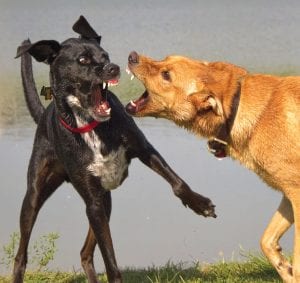 A research study proved that female dogs in a home are more likely to fight than males or a male and female.

Triggers for the fighting are variable. Often resources such as food, toys, access to a bed or couch, or even human attention can trigger a fight. Sometimes noises or overly-arousing situations, such as visitors or excitement when going outside or in doorways or small spaces can be factors.

If you have this problem in your house, how do you deal with it?

First, if the dogs have lived peacefully for years, and the fighting began recently, take the dog that starts the fights to your veterinarian for a complete veterinary workup to eliminate a physical cause for the change of behavior.

Some general tips may improve the situation, but many times the factors and relationships causing the fights are complex and the behaviors should be evaluated by a qualified, reward-based trainer, or veterinary behaviorist who may prescribe anxiety medication. 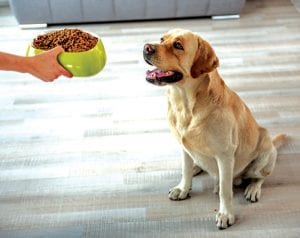 Provide structure and predictability for the dogs by asking them to sit for everything they want.

Tip 1: Management of the environment is critical. Remove any objects that trigger fights between the dogs. If food is the problem, the dogs should be fed separately, preferably out of sight of each other or crated or tethered. Food bowls should be removed as soon as the meal is finished.

Tip 2: Put each dog on a “Say Please” protocol. This means the dogs must sit ( their way of saying Please) for everything they want: dinner, going outside, to be petted, to have their leashes put on, etc. This provides structure and predictability for the dogs.

The dog who is behaving appropriately should be the one to receive the reinforcements (treats, food, petting, toys, walking) first.

Tip 3: Teaching reliable obedience cues, such as stays, leave it, and coming when called, are helpful and certainly help families manage a multi-dog household but should not be depended on to stop a fight.

According to the study, only eight percent of the study dogs were able to be separated from fighting with obedience cues.

It may take four to six weeks to see an improvement in the situation once management and other protocols have been implemented.

What not to do: don’t use physical punishment or shock collars (“e-collars”) to break up a fight or to punish the aggressor. This only increases the stress and anxiety of the dogs and may actually make the situation worse.

Sadly, in some situations the fighting may be so serious, or there may be children in the home who are at risk around fighting dogs and re- homing the aggressor dog may be necessary.

For more tips on managing a multi-dog household see the August 8, 2014, issue of The Columbia Star.