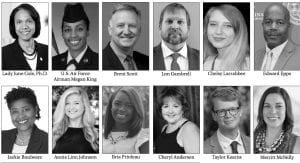 Lady June Cole Ph.D. has been elected to the Columbia board of the League of Women Voters. She will serve as the chairperson of the Observer Corps.

Michelle Motchos, director of structural engineering at Stevens & Wilkinson, has been recognized as the 2018 Engineer of the Year by the S.C. Society of Professional Engineers.

Andy Roger s has been installed as the immediate past president of the South Carolina Society of Professional Engineers.

Jason Jordan has been elected to the South Carolina Society of Professional Engineers.

Lon Gambrell and Chelsy Larrabee have completed the internship at Moore Beauston & Woodham. Gambrell has joined the firm’s Hartsville office. Larrabee will remain at the West Columbia office as a staff accountant. 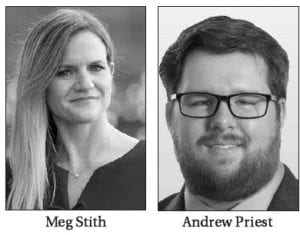 Edward Epps, human services coordinator, and Jade Reynolds, public information coordinator, have been named the Department of Social Service May Employees of the Month.

LS3P has been ranked No. 36 in the Architectural Record’s annual list of the Top 300 architecture firms.

Annie Linn Johnson and Bria Prioleau have joined LS3P. Johnson will serve as an office manager, Prioleau as an architect.

Jackie Boulware has been appointed to the Central Midalnds Regional Transit Authority board of directors by Richland County.

5th Circuit court judge Michelle Hurley is one of 34 judges from 19 states to participate in the National Council of Juvenile and Family Court Judge’s National Judicial Institute on Domestic Child Sex Trafficking in Asheville, North Carolina.

Merritt McNelly and Meg Stith have joined Flock and Rally. McNeely will serve as vice president of marketing, Stith as senior communications manager.

Andrew Priest has joined Colliers International as a property accountant.

Mark Hartley, James Oxner III, and Jake Rasor Jr. have been appointed to the South Carolina Department of Natural Resources board.

Susan Al ford has announced her retirement as director of the South Carolina Department of Social Services.