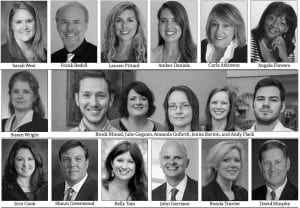 Sarah West has joined McGregor & Company as a staff accountant.

Frank Bedell has joined the Daybreak Pregnancy Center as the executive director.

Those who have changed positions at the Daybreak Pregnancy Center include Lauren Pittard, from nurse manager to deputy director, and Amber Daniels, to director of client services.

Carla Atkinson, Angela Flowers, Reverend Josie Holler, and Susan Wright have been appointed to the Sexual Trauma Services of the Midlands Board of Directors.

Those who have been appointed to the Lourie Center Board of Directors include Erin Cook; John Hutto, board chair; Wally Graves, vice chair; Laura Spells, treasurer; and Gail Wilson-Giarratano, secretary.

Shaun Greenwood, assistant city manager of the City of Cayce, has received the credentialed manager designation from the International City/County Management Association.

Beth Palmer and Tommy Preston have been named ABA YLD Stars of the Year.