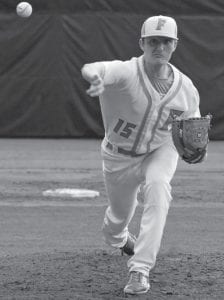 Three runs in the fourth and two in the sixth ignited the A.C. Flora Falcons’ offense in a 7-1 win over the visiting Richland Northeast Cavaliers Tuesday, April 7.

The A.C. Flora offense got rolling early in the game. In the bottom of the first inning, Watts Eaddy hit a single scoring Coleman Pope and giving the Falcons a 1-0 lead.

A.C. Flora expanded its lead in the bottom of the third, when Eaddy once again drove in a run; this time it was Josh Hernandez, as the lead grew to 2-0.

Blake Loggins pitched a stellar game for the Falcons but struggled in the top of the fourth.

Richland Northeast began the inning with a double from Nick Gelting. A misplayed bunt from T.C. Coleman gave the Cavaliers runners on first and third. A second bunt, this time by Joe Stanton, loaded the bases with no one out. Henry Taylor was able to cut the deficit in half with a sacrifice fly, scoring Gelting.

Loggins kept the damage to just one run, getting Justin Davidson to ground out and Shannon Glover to strike out to end the top half of the inning. 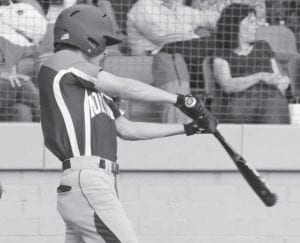 A.C. Flora responded in the bottom half of the inning. An RBI double from Lane Botkin scored Will Loving. Later in the inning, Hernandez hit a triple, scoring Botkin and Donald Gillespie and increasing the Falcons lead to 5-1.

A.C. Flora struck again in the bottom of the sixth. A double from Pope scored Bailey Mathews and Jonnie Hernandez, and the Falcons led 7-1.

It was more than enough offense for Loggins who, despite the problems in the fourth inning, didn’t allow another Cavalier run. He pitched a complete game, allowing one run and five hits. He struck out six RNE batters. Josh Hernandez, Eaddy, and Pope each finished 2-for-4 from the plate. Hernandez and Eaddy each had two RBIs, and Pope had one.

Gelting was 2-for-3 for RNE with a run scored.