Falcons fly by Lower Richland and into the championship 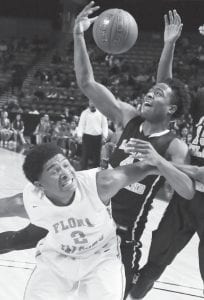 A 32-point fourth quarter turned a close game into a 77-49 blowout for the A.C. Flora Falcons over the Lower Richland Diamond Hornets in the Class 3A Upper State Championship game held at Greenville’s Bon Secours Arena Monday, March 2.

“We did not expect a blowout,” A.C. Flora coach Joshua Staley said. “We told them to stick to the game plan, and we were blessed to have some success. Lower Richland played really well early. They were gritty, and they were playing hard. We just wanted to take advantage of every scoring opportunity we had.”

It was Lower Richland that jumped out to an early 6-3 lead following buckets from Ja’Cor Nelson, Kelvin Washington, and Alex Caldwell.

A bucket from Richardson cut the deficit to a single point.

James Reese countered with a 3-pointer and a bucket to extend the Falcon lead to 14-8. 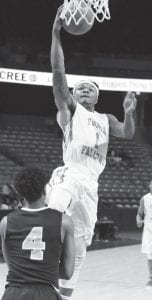 A.C. Flora’s Rion Davis gets a layup as Lower Richland’s Jared Richardson tries to get the charge.

Once again, Lower Richland was able to close the gap to one point, following a bucket from Brian Jones and a 3-pointer from C.J. Nuttry.

Kendale Hampton scored in the closing seconds of the first quarter to give A.C. Flora a little breathing room at 16-13.

The Diamond Hornets once again made it a one-point contest with a bucket by Clyde Trapp to begin the second quarter.

Davis scored two field goals to push the Falcon lead to 20-15. The lead remained at five points until Davis extended it to 26-19 with a bucket.

Lower Richland ended the half on a 7-3 run with the points from Nuttry, Trapp, and Richardson as A.C. Flora clung to a 29- 26 halftime lead.

The Falcons scored the first nine points of the third quarter to widen their lead to 38-26. Gamble, Hampton, and James Murray Boyles were responsible for the run. Points from Richardson and Nelson made the score 38-31. Gamble, Hampton, and Gray answered to push the lead back to double digits for A.C. Flora with 2:11 left in the third. Free throws from Nuttry and a bucket from Onik Veal kept Lower Richland in the game at the end of the quarter, despite trailing 45-38.

A 3-pointer from Caldwell at the start of the fourth quarter closed the deficit to four points. Then Davis led the Falcons on a 15-4 run.

A bucket by Richardson made the score 60-47, before A.C. Flora scored the next nine points. The points came from Davis, Murray-Boyles, and Hampton. The Diamond Hornets were able to get the deficit to 20 points following a pair of free throws from Washington. The Falcons scored the last eight points of the game, including a 3-pointer from Kejuan Boye in the closing seconds to take away the 28-point win.

Davis led the Falcons with 23 points.

“Rion is an All-State player, if not one of the top players in 3A. He’s our leader. He has a lot of heart, and he made plays down the stretch,” Staley said.

Gamble added 14, and Murray-Boyles finished with 13 points for A.C. Flora.

Richardson led the Diamond Hornets with 12 points, and Nuttry finished with 10.

With the win, the Falcons advance to their second straight 3A State Championship game where they will face Midland Valley.

“ These guys have practiced like champions the last six weeks. They bought into everything I’ve told them, so we are not surprised when we pull away at the end of games because they prepare so well,” Staley said, “We have to prepare and get ready for a very good Midland Valley team.”