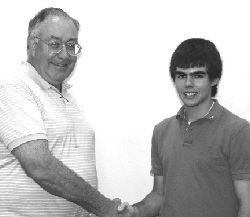 Alan Shoemaker (l) congratulates John Hodge Jr. on his being elected a student member in the Explorers Club.

Alan Shoemaker enjoys the best of all possible worlds. He retired from Riverbanks Zoo several years ago and now travels from A to Z on a regular basis. Part of the time, he’s helping zoos procure exotic animals, and, part of the time, he’s leading tours to exotic places with Overseas Adventure Travel. At the monthly meeting of the Greater Piedmont Chapter of the Explorers Club last week, he told of his latest tour to Greece.

Shoe, as he prefers to be called, got most excited when he told of finding a three- foot- long, legless lizard outside the Church of the Dormition of the Virgin in Meteora. His next emotional moment came on a hill on the island of Santorini. Following a flash of cognition, he realized he was standing on the remnant of the rim of a volcanic caldera blasted away in 1600 BC. This huge bear of a man perceives legless lizards and volcanic explosions as paradise on earth.

For the less lizard/volcano- oriented members of the audience, Shoe did expound on the beauty of Greek culture. In Athens, he led his group of 14 up the Acropolis, pointing out that Pericles directed the building of the Parthenon 500 years before the Common Era. Of course, he had to point out that the roof was blown off by Venetians in 1687 when the Ottoman Turks foolishly stored their gunpowder in it.

After eating in the Plaka, Shoe and his entourage visited the museum, then ate again. “The Greek food is wonderful,” he said licking his chops. They toured Delphi, took a Greek cooking class, and ate again.

Once aboard their privately chartered small ship, Shoe guided to Tinos, Delos, Mikonos, and finally to Santorini where he had his previously- mentioned revelation. Every now and then, he would throw in a few words the Explorers wanted to hear: Zeus, Dionysos, Apollo, and Artemis. Each night they returned to the ship and ate “wonderful Greek food.” He especially liked syros loukoumi, Greek sweets.

For information on the Explorers Club, please contact Nena Powell Rice at nrice@sc.edu or 777-8170.