Counter surfing, the sport of canines 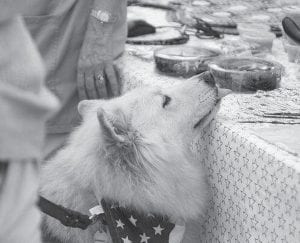 Maybe they won’t notice if I just take a little lick,” says Rebel.

Where DID that leftover pizza slice go? I know I took it out of the refrigerator and put it on the counter… uh, oh, what is on Fido’s mouth? Is it tomato sauce?

Food stealing, scavenging or counter-surfing, as it is commonly known, is a familiar problem to many dog owners. In fact, when I put out a Facebook request to my dog-owning friends for photos for this article, I received more pictures than I would have expected.

If you are a small dog owner, you can probably skip this training advice. Counter surfing is more commonly a problem of larger dogs that can put their front paws up on counters and use those super sensitive noses to find any little crumb of food left on the kitchen counter or table.

Counter surfing is more than just an annoying behavior; it can be extremely dangerous for your dog. In 2005, a shocking story circulated the media about a four-month old St. Bernard puppy that swallowed a 13 inch butcher knife after surfing for turkey left on the kitchen counter. Miraculously, a veterinarian was able to save the puppy’s life with surgery. Photos of the x-rays of the knife in the puppy’s stomach can still be found on the internet. 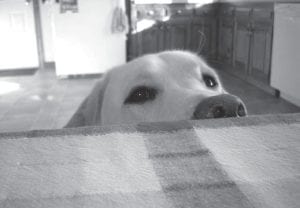 “I know there must be food up there. I can smell it,” says Harry.

Counter surfing can be a persistent problem because it is easily rein- forced. If your counter surfing canine “scores” even a tiny crumb on the counter, his behavior is rewarded (in his mind). The picture of Sofi the Border Collie shows her attempting to get literally one piece of rice from the kitchen counter!

So how can you fix this common, persistent behavior problem? My best advice is to prevent the behavior from happening. This is done by keeping your counters completely clean when you are not using the kitchen. All food, in any amount, must be put away and the counters kept clean. If your dog reaches up and gets a lick of even a small piece of crust, his effort has been rewarded.

And, as we say in the dog training world, behaviors that are rewarded are repeated. This advice is particularly important for those of you who have gotten new puppies. You will be saving yourself a lot of trouble in the future if you begin the practice of clearing your counters while your puppy is small and before he can learn the satisfaction of stealing food from counters. 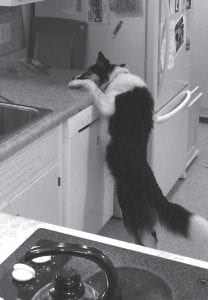 Sofi is trying to get that one piece of rice she sees on the counter. Her dad, Tom Owens, calls counter surfing her “super power.”

For those of you whose dogs have been practicing this skill, if you begin now to keep the counters clear and are consistent in preventing your dog from being successful in future food-stealing efforts, his non-rewarded behavior will eventually stop. If you are working in the kitchen and cannot watch your dog every second, crate your dog or block him from getting into the kitchen while you work.

A training tip to use in combination with counter management is to teach your dog that the good stuff is actually on the floor, not up on the counter. Armed with a handful of treats, walk into the kitchen with your dog. Toss a treat on the floor near your dog. Move around the kitchen and toss treats one at a time near him, then leave the kitchen. 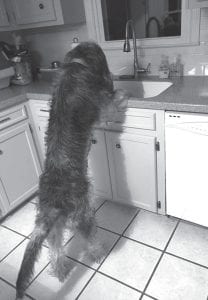 Counter surfing is primarily a large dog problem. Owners of small dogs have one less problem behavior to worry about.

During your next training session, toss several treats into the kitchen in front of you as you enter the kitchen with your dog. Once he has found and eaten those treats, move around the kitchen tossing treats one at a time onto the floor near your dog, like you did in the first lesson.

Practice this frequently until your dog gets into the habit of searching on the floor for food whenever he enters the kitchen. After those initial training sessions, you should periodically plant treats on the kitchen floor to reinforce his head-down search for food, instead of a heads-up search on the counter!

Teaching your dog to lie quietly on a mat or bed while you work in the kitchen will keep him from attempting to steal food while you are there (but will not prevent him from counter surfing when you are not around).

If your dog already knows how to Down and Stay, you can cue him to Down/Stay on a comfortable bed or mat that is placed out of the way of your work space. Encourage him to stay on the mat by walking over periodically and dropping treats, or even dog-safe bits of food from your cooking, on the mat while he is there. You will be teaching him that he does not have to search for food on the counter because being on the mat is extremely rewarding.

Remember, the key to success in teaching a dog not to counter surf is to manage the environment, so he is not rewarded for the behavior… keep your kitchen counters free of any scraps or crumbs.