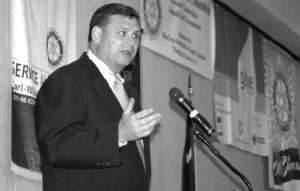 Taylor began his speech with a fond recollection of when he was a member of the Columbia Rotary Club. In the mid-80s when Taylor was in his mid-20s, he needed a new bank. He was turned down a few times before he called fellow Rotarian John Folsom, who directed follow-up and full banking services.

Having worked hard and built his business in the private sector, Taylor said he was surprised to discover how much work he had to do in the public domain. He proceeded to cite some of the successes of hard work at his state agency: BMW’s 1,000,000th car off the assembly line in Greer; revitalization of downtown Bishopville; mammoth expansion of the Carolina First campus in Greenville; Guard Industries and its occupancy of the Mack Truck plant in Winnsboro; the opening of the Vought Aircraft plant near the Charleston Airport; the new First Citizens Bank headquarters complex on Main Street in Columbia; 117,000 more South Carolinians at work today than three years ago; the ninth fastest job growth in the United States; for the last year, South Carolina had a gain in sales taxes of 7.3%, in corporate taxes of 28.8%, and in withholding of 7.1%. A Chicago consulting firm declared South Carolina America’s #1 pro-business state.

According to Taylor, the SC accomplishments cited combined with South Carolina’s quality of life make for an unbeatable package, said Taylor. He added it’s tough to recruit headquarters, but worth the efforts. At the same time, smart growth strategy allows for homegrown headquarters. For 2005, South Carolina had $1.27 billion in new investment from outside firms and another $1.39 billion from existing corporate citizens and resident firms.

The recruitment project load at the state Commerce Department is ahead of last year. Carl Flesher, formerly the vice president of corporate and associate relations at BMW Manufacturing in Greer, has just come on board to manage the department’s team of business recruiters.

Taylor itemized four South Carolina advantages in business recruitment: (1) strategic distribution location and facilities, (2) the Port of Charleston, (3) abundant fresh water, and (4) plenty of electric power with more to come. To those four he added the availability of broadband, particularly the complete count of every public library and every public school.

In conclusion, when asked what needed to be added to his presentation, Taylor shared his enthusiasm and recognized the importance of getting out the good news.