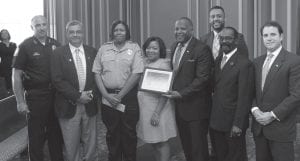 With a vote of 4-2, Columbia City Council adopted the budget for the 2015-2016 fiscal year at its monthly meeting Tuesday, June 16. Moe Baddourah and Cameron Runyan voted against the adoption, while Mayor Steve Benjamin, Sam Davis, Tameika Isaac Devine, and Brian Newman voted in favor. Leona Plaugh was not at Tuesday’s meeting.

By the same four to two vote, council approved the 9.5 percent increase to the water and sewer rates and the two percent franchise fee increase.

Following the vote, Devine requested further education be offered for citizens in regards to the water and sewer rate increases. She says she has received phone calls from residents who have been misinformed about the impact the increase will have on their bills.

An ordinance granting a franchise to All Star Hot Dogs for operation of a stationary sidewalk vending car in the midblock pad of the 1100 block of Gervais Street was approved.

Council approved the first reading of an ordinance to annex 954 Custer Street.

Another resolution, passed by council, authorized the city manager to execute an agreement between the City of Columbia and Edwards Communities Development Company for parking, lighting, curb, gutter, and sidewalk improvements underneath the Blossom Street Bridge.

Council approved a certificate of convenience and necessity for Sylvia Ann Tatum to do business as Buckhead Mobile Ads, inc. Tatum says she hopes to go public in the next few weeks.

Another certificate of convenience and necessity was approved for Steven Riddle to do business as DUI Taxi.

A neighborhood street lighting request for one light on 1209 Franklin Street was approved.

A request for a four way stop at the intersections of Read, Heidt, and Waverly Streets was approved.

Devine proclaimed 2015 as the Year of the Lady Gamecocks.

The next Columbia City Council meeting will be held Tuesday, July 21 at 1737 Main Street beginning at 6 p.m.