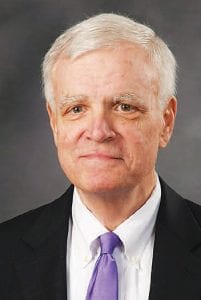 We are deeply saddened to share that Cameron “Cam” Littlejohn passed away on Tuesday, July 24, 2018. A beloved volunteer for over 30 years, Cam was an avid supporter of USTA South Carolina and the South Carolina Tennis Patrons Foundation.

Cam served as Legal Counsel to USTA SC for 19 years, having been appointed by President Dan Santorum in 1992. Cam was chairman of the By-Laws and Policies Committee for ten years, and the Grievance Committee and Adult League Council for a number of years. In 2010 Cam was elected vice president of the board of directors. He served as executive vice president for two years and as president from 2014- 2015.

Bob Masella, current legal counsel for USTA SC holds Cam in high regards. Cam brought Masella on the board when he assumed the role of vice president.

“Cam was one of the nicest, brightest, funniest people. He was very good with getting people to understand ideas, without talking to them in a way that made them feel less-than. In law, people respected him and trusted him. He conducted business even handedly. At the USTA, he kept everyone on a straight and narrow without you knowing it. I believe the legal community and the tennis community respected Cam not only for his demeanor, but also for his intellect.”

“Cam was always willing to do whatever you needed him to do to help out. Anytime I asked him to do something, he did it. When I first became president, he helped me significantly with a situation we had with the executive director at the time. Cam was very helpful in working with me to sort out the arrangements to make things work. Cam was legal counsel for almost 20 years that was all pro-bono; there was never any charge for that work.”

Former president Al Marshall served on the board of directors while Cam was legal counsel, a role that made Cam ineligible to vote. This became an anecdote of sorts amongst Cam and the board over the years.

Maynard chuckled, “He’d been sitting in the room for close to 20 years without being able to vote, and then he could.”

Marshall reminisced, “We all had such a high regard for him and his wife. The guy is phenomenal, and we always had such a good time together. Everyone gets along with Cam.”

Past president Lucy Garvin said, “For me personally, Cam was always there to assist and advise if you needed it, certainly during my years with the USTA SC board and during my two years as president. I would turn to Cam many times and there was never a phone call that went unanswered, he always got back to me. It was just the kind of person he was.”

Garvin continued, “Honestly, he’s such a great guy, and such a wonderful individual. He loved tennis, and he gave back in so many unselfish ways. He had to give so much of his time when he volunteered on committees and when he rose to become president of USTA S.C., all while having a very successful law business.”

Masella said, “He will be missed. In law because he’s one of those people who you can really trust, and in the tennis community as someone who cares. When the floods came through in 2015, Cam took care of everyone, he made sure the courts were back up and running, at Murraywood, his home facility, and at a few others.”

A long-time tennis player, Cam participated in several USTA leagues and many tournaments with his wife, Fran.

USTA S.C. President Ernie James reflected on his relationship with Cam that developed over the years.

“He and his wife Fran enjoyed coming to Florence for tournaments and Pro-Am events. Cam encouraged and supported me as I became involved with the tennis association. He was a good guy, and he’s going to be missed.”

Past President Ron Charron enjoyed talking about time they spent together on-court during various meetings.

“He was an avid fisherman, and a pretty good tennis player as well. We played some matches over the years. He was a serious player, but it was fun because he was always cracking jokes. He had a sort of self-deprecating sense of humor. We’re all very sad, he was an all-around great guy and he will be sorely missed.”

Masella joked, “On the tennis court he wasn’t very good. He’s a lifetime 3.0, like me.”

His contributions to the tennis association extend far beyond the board room.

Immediate past president, Bob Peiffer recounted, “The thing that struck me about Cam was that he was always a gentleman, and he had the absolute best sense of humor. He would come up with things that would just have everyone in stiches and they would be short, witty little things but they were absolutely perfect for the moment.”

Maynard said, “Cam was just a good guy, a likeable guy, a funny guy. When he was president he would emcee the Hall of Fame banquet and he would come up with the funniest, off-the-cuff remarks. It’s a big loss to South Carolina tennis.”

Past president Paul Pittman said, “He was one of the nicest, friendliest, most decent guys I have ever known. The way he treated people, the way he acted and his outlook on life. He didn’t hesitate to give an opinion when warranted, but always delivered it in a way that was kind and well delivered.… his judgement was solid. I don’t know if he had any enemies, but I sure don’t know of any.”

Masella said, “You’re not going to find a better guy than Cam, I think everyone agrees with that. Easy going, gentle, smart. He always made you laugh, the greatest emcee that we could have.”

In 1997, Cam was the recipient of the Lucy Garvin Volunteer of the Year Award. This year, the United States Tennis Association of South Carolina has rededicated an award in his honor, the Cam Littlejohn Community Service Award.

“We felt that because of what Cam has done at USTA SC in terms of years of service, he is highly deserving of having this award renamed in his honor,” said Peiffer. “Cam was on the board for close to 30 years, which is very unusual. The fact that he served almost 20 years prior as legal counsel sets him apart in terms of community service.”

The Cam Littlejohn Community Service Award will be presented annually at the USTA SC Annual Meeting.

“He gave us 30 years of his life, that’s significant time and expertise,” said Maynard. “We thought the community service award was appropriate.”

“I feel heartfelt sympathies for Fran,” said Garvin. “Cam is an incredibly talented and wonderful person. The world of tennis has been very fortunate to have had Cam as our friend, and as a volunteer.”