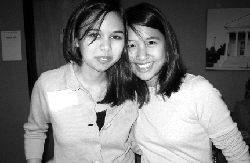 For some Midlands students, an international experience was just a bus ride away on March 14. Students from several elementary schools grabbed their passports, boarded their busses, and traveled to AC Flora for the school’s Children’s International Day.

The event was organized by Renee Quick, a teacher at AC Flora, and was a collaboration of high school junior and seniors, foreign language classes, and English as a Second Language (ESL) students.

Upon arrival, the elementary school students were directed to an assembly where they watched a bilingual skit of Goldilocks and the Three Bears . The skit had both a Spanish and English-speaking cast, and the two groups alternated scenes throughout the play. The assembly also featured a jazz band, bagpipes, a string quartet, and a German song sung by Wes Brax.

Afterwards, the students were directed to another designated building where, armed with passports and goodie bags, they traveled from country to country. Each room represented a different region of the world, and taught students crafts, games, dances, and music that were representative of that country.

Students who went to Mexico, for instance, made “Ojos de Dios,” a colorful creation of string and sticks that is made and used by children in Latin America. Others went to France, where they made “escargot hats,” (paper hats made to look like snails), and watched a French music video. In Africa, students listened to traditional story telling, and in Russia, they learned the Russian words for various animals.

Anna Moorehead, a student at AC Flora whose French class helped out with International Day, said “All the kids really seemed to enjoy making the crafts. One kid even refused to leave.”