Celebrating 50 years as a Rotarian 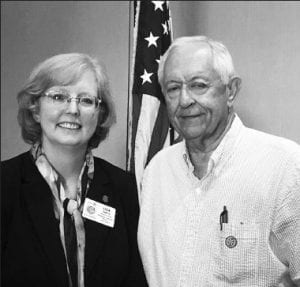 Dr. Davis joined the club on August 8, 1968, along with Ned Funderburke and Floyd Harper. At that time, there were only four Rotary clubs in the area. Dr. Davis served the club for 20 years as Sargent-at-Arms and was the Club President in 1975-76.

A native of Savannah, Georgia, Dr. Davis first encountered Rotary when he was granted a school loan from the Rotary Club of Savannah. He is a veteran, having served in Vietnam. He is married to Diana, and they have four children and four grand-children. Dr. Davis began working as an optometrist in 1967. He retired from Eye Associates of Cayce- West Columbia in 2014.