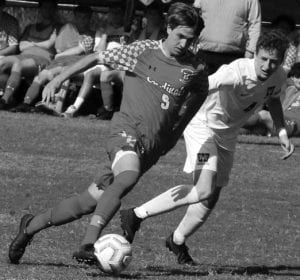 Jaime Lopez Gutierez struck first for the Cardinals floating one of the Westside keeper from the top of the box in the eighth minute.

Then, in the 17th minute, Matthew Binnette sent a corner kick into the box that Palmer Dayhuff headed in for a 2-0 advantage. The Cardinals took that lead into halftime.

Cardinal Newman rattled off eight shots before Brandon Rienecker charged in from the right sideline and crossed a pass into the box that Garen Presnal let go through his legs to Binnette stationed on the left of the box. Binnette punched it in for the 3-0 lead in the 51st minute.

Binnette struck again five minutes later when Presnal got loose on the left side of the box, waited for Binnette, and dropped a perfect ball in front of the goal for Binnette to finish.

Adam Trimmier added the final goal in the 73rd minute with a right footer that bounced off the right post and in.