The Cardinal Newman Cardinals blew out the Wilson Hall Barons 15-4 in the deciding Game 3 of the SCISA 3A Softball State Championship Series.

Sydney Jarecki gave Wilson Hall a 2-0 lead in the top of the first with a homer over the left field wall, but Cardinal Newman came back with three in the bottom half of the inning with an RBI double from Bostic and a two-RBI single from Dinkins.

The Cardinals added another run in the bottom of the second when Hogan homered to center field to lead 4-2.

Cardinal Newman then blew the game open with seven runs in the bottom of the third. Karson Hocutt brought home Greenwood with a single to left. Hogan added an RBI single, and then Gillespie doubled to center field scoring Hocutt, Elizzabeth Kay, and Hogan. Dinkins added the final runs of the inning with a two-run double, and the Cardinals led 11-2.

The Barons got two in the top of the fifth for the final 15-4 margin.

See the complete report from the game in next week’s edition of The Columbia Star. 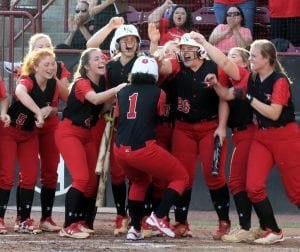 Photo by Jim MarczeskyCardinal Newman’s Jasmine Hogan is mobbed by teammates at home plate after she hit a home run against Wilson Hall. 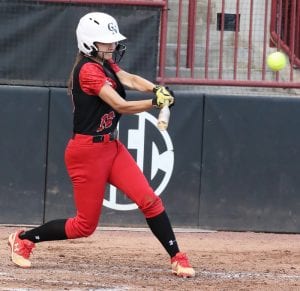 Photo by Jim MarczeskyMary Kathryn Gillespie hits one of her two doubles against Wilson Hall. 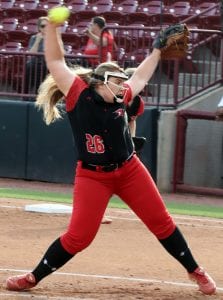