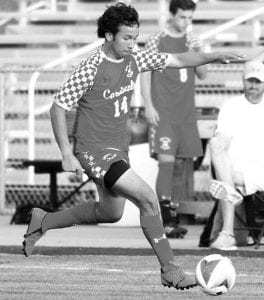 The Cardinal Newman Cardinals celebrated Senior Night and an 8-0 SCISA 3A boys soccer quarterfinal victory over the visiting Wilson Hall Barons Monday, May 6.

It could have been much worse, but Cardinal head coach Will Eudy played his seniors, some of which were well down the depth chart, and substituted liberally throughout the match.

That did lead to a bit of a slow start and an odd beginning to the scoring as the Cardinals converted penalty kicks to take a 2-0 lead.

Garen Presnal was fouled in the box late in the 13th minute. Senior David Greenwood converted the ensuing penalty kick. Two minutes later, Palmer Dayhuff was tripped in the box, and this time, senior center back Gavin Yancey con- verted the kick.

Another senior, Jose Gonzalez, took a pass from Presnal in the 26th minute and punched it in the right corner for a 3-0 lead.

Marino McGloster took a shot in the 33rd minute that bounced off Wilson Hall keeper Luke Kinney right to a charging Greenwood who put it in the net for his second goal and a 4-0 Cardinal advantage. 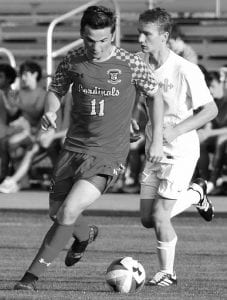 Cardinal Newman’s David Greenwood looks for room to work against Wilson Hall. Greenwood had a hat trick for the Cardinals.

McGloster then took a cross from Jaime Lopez Gutierez in the 35th minute and one-touched it by Kinney to set the score at 5-0.

Zach Williams then worked his way across the box and sent a shot into the left corner to give Cardinal Newman a 6-0 lead to start the 37th minute.

Greenwood completed a hat trick in the 61st minute when he charged down the left side of the box, took a pass in stride from Noah Cunningham, and knocked it in to put the Cardinals up 7-0.

Cardinal Newman’s final goal of the night came in the 68th minute when Jack Lapin intercepted a pass, charged down the middle of the field, and ripped a right footer to the left corner.

The Cardinals host Heathwood Hall in the semifinals Wednesday, May 8. The Highlanders beat Porter-Gaud 2-1 in overtime to advance.