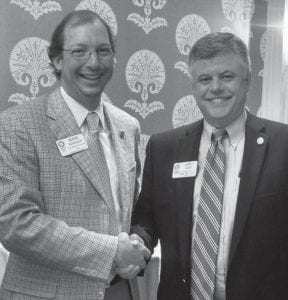 Capital Rotary 2014-2015 president Mark Bokesch thanks club member Jimmy Gibbs (r) for two years of service as an assistant governor for Rotary District 7770. In this capacity, Gibbs worked not only with his home club, but also with five others in the area including Columbia, Columbia East, Five Points, Vista Nights, and the Main Street club. This earned him Capital Rotary’s Leadership Award for the past year. Gibbs is a past president of the Capital Club and was named its Rotarian of the Year in 2000.