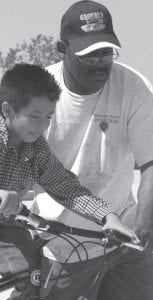 For the past three years, a selected group of children whose parents are serving with the South Carolina National Guard as active duty military personnel have been the participants of the annual Build-A-Bike award sponsored by Golden State Foods Foundation to commemorate Armed Forces Day. Golden State Foods is a national supplier of products for the food service industry and work with local suppliers to help plan Build-A-Bike in over 20 locations nationwide.

The Lexington Golden State Foods is located at 2588 Two Notch Road in Lexington, SC. This company provided over 20 volunteers to participate in Build-A-Bike on May 16, 2015 to help 31 children of military personnel in Columbia build their own bike with all materials supplied by the Golden State Food Foundation.

The Build-A-Bike event was held at the South Carolina National Guard Armory in Columbia, SC on Bluff Road. Each child worked with a mentor to build their own bike and pizza, chips and beverages were provided to all who attended.