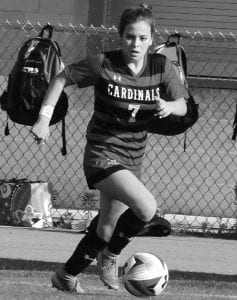 The Cardinal Newman Lady Cardinals overcame a sluggish first half with three quick goals in the first five minutes of the second half—and an eventual hat trick from Tristan Millard— as the Cardinals downed the visiting Ashley Hall Panthers 6-1 in first-round girls’ SCISA 3A soccer playoff action Tuesday, May 7.

The Cardinals and head coach Will Plexico move to the next round with a 14- 6- 1 overall record. Head coach Marc Simpson and the Panthers finish the campaign with a 7-9 slate.

And the first half crawled on to intermission. The Birds gathered in a little nest near midfield at halftime and coach Will Plexico had a little conversation.

“I think it was just their confidence,” the Cards’ head coach said. “I heard several of them saying before the game how nervous they were, and it showed. I think we were more talented, but Ashley Hall was working super-hard which was keeping the game very tight.

“A lot of these girls have played in big games, but there are a handful who haven’t. It only takes one or two to throw things off, and we were kinda losing our cool a little. We regrouped at halftime, told them to be a little more confident. We switched a couple of players to different positions.”

And the Cards soared from their nest right from the start of the second half. Three goals in the first five minutes— Victoria Brook (41st), Caitlin Murphy (44th), and Tristan Millard (45th)— put the hosts in control. Millard completed her hat trick with two goals in the next ten minutes (53rd, 55th) for extra insurance.

“That is major for her,” Plexico said. “This is big for her and her confidence.”

Cardinal Newman got 24 shots on goal against Panther keeper Kristi Lee Kirkland, who had nine saves. Ashley Hall took 14 shots on goal against three Cardinal goal tenders. Senior keeper Maddy Nahigian went into the 64th minute of the match and reeled in seven saves. Sophomore Megan Holbrook came in for about 10 minutes and got one save. Izzy Srulevich, a freshman, got pulled up from the junior varsity and manned the net for the last five minutes.

“I wanted to give the senior (Maddy) a nice going away on this field,” Plexico said. “It is probably the last one we will play here in the playoffs. It is very good to be able to reward these kids for what they have worked for.”