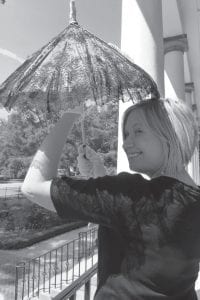 University of South Carolina student and Museums Department summer intern Hannah Keefer demonstrates the use of an original 19th century parasol in Historic Columbia’s collection. With its carved ivory handle and fringed silk canopy, this example would have been an expense accessory to the well-dressed lady.

The triple-digit summer heat has revealed that there are some very smart Columbians when it comes to dealing with the heat. They are easy to spot when out of doors on hot sunny days because their umbrellas give them away. While the rest of us seek the shelter of a tree or awning, these smart folks enjoy perpetual shade as they saunter down the sidewalk.

Once upon a time, all men wore hats and most women carried parasols to counter the southern summer sun. The museum collection of Historic Columbia includes seven examples of women’s parasols that were designed not for rain but sun protection. The use of parasols goes back to the ancient Egyptians, but it was during the 19th century their design reached its peak.

Basic parasols made of wood and inexpensive fabric worked just as well as high end ones, but for the creative designer, a woman’s parasol was also a chance to make an eye-catching status symbol. For example, extrava- gant models of the 1800s used carved ivory for the central stick (referred to as a ‘fit-up’ by manufacturers), ribs made of whalebone and a cover of silk, which was sometimes heavily embroidered. In May of 1865, spring fashions in Columbia included a “Parasol of straw colored silk, edged with chenille fringe,” according to the Daily Phoenix. We associate parasols with women historically, so it begs the question: did men ever carry them? With the exception of late 18th-century Macaronis, the answer is no. Even the carrying of umbrellas, which were larger and stouter, for rain protection evolved begrudgingly for men.

The use of an umbrella during the summer heat is something for us all to consider. Not only can they reduce cancer causing UV rays, they also drop your skin’s temperature up to ten degrees. So while it appears that parasols have forever faded out of fashion for women, fortunately today there are no gender barriers in umbrella use for sun protection.