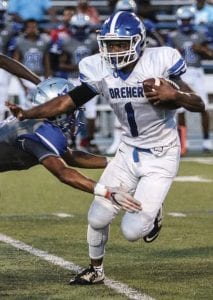 Despite falling down early, the Airport Eagles got three touchdowns from Nanders Lawrence and one each from Zach Roberts, Dwayne Lewis, Emari Melidor, and Josh Goodman to outlast the Dreher Blue Devils 49-35 Friday, August 17.

The momentum immediately swung in Dreher’s favor on the opening kickoff, when Justin Dingle ran 84 yards for the score and a 7-0 lead for the Blue Devils.

The Eagles took a 14-7 lead with a 35-yard catch and run from Caughman to Lawrence.

Dreher utilized its ground game on its next drive, turning to Day Day Washington three times for 39 yards, including a 24-yard scamper to even the score at 14-14.

On the next Airport drive, a long kickoff return gave the Eagles the ball at the Dreher 24-yard line. Dwayne Lewis rushed four consecutive times for 19 yards. After a 4-yard scamper from Caughman got the ball to the Dreher 1- yard line, Lewis got it over the goal line to give Airport a 21-14 lead at the end of the first quarter. 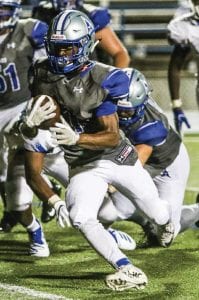 A 2-yard touchdown run by Ritches McDaniel shrunk the Dreher deficit with 3:30 left, but a missed extra point kept Airport ahead 21-20.

Another good kickoff return by the Eagles gave them the ball deep in Dreher territory to start the next drive. One play later, Lawrence raced 37 yards for a touchdown, putting Airport up 28-20 at halftime.

Dreher found the tying score at the 7:36 mark of the third quarter when Washington barrelled into the end zone from three yards out. McDaniel completed the two-point conversion tying the game at 28-28.

The game hung in the balance at the start of the fourth quarter, and Airport came up with the big play. After getting Dreher to turn the ball over on downs late in the third quarter, the Eagle offense drove from its own 42-yard line. Aided by long runs from Lewis and Lawrence, a 7-yard pass from Caughman to Roberts got the ball into the Blue Devils’ red zone at the start of the fourth. A 2-yard run by Lawrence capped off the seven-play drive and gave the Eagles a 35-28 lead.

Airport expanded its lead to 42-28 three minutes later with a 43-yard pass from Caughman to Emari Melidor.

Dreher climbed back into the game with a 6-yard run by Washington, shrinking the deficit to 42- 35 with 4:57 remaining.

However, the Eagles slammed the door shut on a comeback with a 1-yard run by Josh Goodman to produce the final 14-point win.

Airport opens the season with a 1-0 record with the win. The Eagles host Brookland-Cayce Friday, August 24.

Dreher falls to 0-1 and will travel to Lexington.