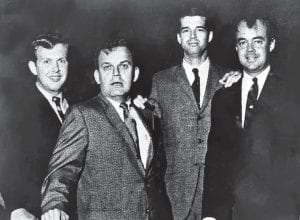 I was 20 years old, a college journalism student working for WIS-TV News in Columbia, S.C. Somehow, I convinced the station to send me to Chicago to cover the convention with my boss, Jim Covington.

The coming week would change my life, not to mention get me out of college a year early. After Chicago, the University of South Carolina journalism school gave me a full year’s credit for the one week experience.

As the Democratic National Convention got underway in Chicago, thousands of antiwar demonstrators took to Chicago’s streets to protest the Vietnam War and its support by the top Democratic presidential candidate, Vice President Hubert Humphrey.

An antiwar faction led by Senators Eugene McCarthy (D-Minnesota) and George McGovern (D-South Dakota) advocated unconditionally halting the bombing of North Vietnam; negotiating a mutual withdrawal of U.S. and North Vietnamese forces from South Vietnam; encouraging the Saigon regime to open negotiations with the National Liberation Front; the acceptance of a coalition government; and the reduction of U.S. combat operations in the South.

The other faction endorsed the Johnson administration’s handling of the war, applauding the president’s efforts to scale down U.S. commitment and begin peace talks.

During the four-day convention—the most violent in U.S. history— police and National Guardsmen clashed with protesters outside the International Amphitheater, and hundreds of people, including innocent bystanders, were beaten by the Chicago police.

The violence even spilled into the convention hall, as guards roughed up delegates and members of the press, including CBS News correspondent Mike Wallace, who was punched in the face.

On August 29, Humphrey secured the nomination and the convention ended.

The convention opened my eyes in many ways. I was in S.C. Governor Robert McNair’s hotel suite when Humphrey selected Edmund Muskie as his running mate, overlooking McNair. The young South Carolina governor had been tainted by his deceptions involving the Orangeburg Massacre and its cover-up.

Later, I was also in a small room with Humphrey—always the “happy warrior” on television— cursing up a storm. I couldn’t believe I was seeing this happen. It was one wild, “coming of age” week.

In the convention’s aftermath, a federal commission investigating the convention described one of the confrontations as a “police riot” and blamed Chicago Mayor Richard Daley for inciting his police to violence.

Nevertheless, eight political activists, called the “Chicago Eight,” were arrested on charges of conspiring to incite the violence, and in 1969 their trial began in Chicago, sparking new waves of protests in the city.

We were using a very heavy Auricon 16mm film camera that summer to shoot footage in the streets of Chicago. One day upon going out, I saw a Japanese video crew with a small portable Sony Portapak, the first portable video system ever made. Its light-weight made a huge impression on me. A few years later, I bought one and launched my own career in video.

Also working in the Chicago streets that sum- mer was Haskell Wexler, the late cinematographer. He was shooting Medium Cool, which was released a year later. It starred Robert Forster, Verna Bloom, Peter Bonerz, Marianna Hill, and Harold Blankenship and took place during the convention.

It was notable for Wexler’s use of cinema vérité-style documentary filmmaking techniques, as well as for combining fictional and non-fictional content. That film became a vital part of my own film education.

In 2003, Medium Cool was selected for preservation in the U.S. National Film Registry by the Library of Congress as being “culturally, historically or aesthetically significant.”

The year 1968 was an amazing time to be 20 years old. I feel lucky to have experienced the 1968 convention and all the other now historical events of that remarkable year. Looking back, it was clearly the most significant year of my life. It was the time I came of age.

My friend, Jim Covington, and I were reminiscing about attending the 1968 Democratic National Convention in Chicago. He told me an interesting story I had never heard before.

As we entered the convention floor, we stuck the end of the card into a reader to verify it was valid. Obviously, the data on it didn’t include the user’s name because we traded and borrowed cards to freely enter the convention. Like, I said, security was very weak in those days.

When Jim returned home to Columbia, he had his convention card in his wallet. He encountered a new card-operated electronic gate at the Columbia Hospital, one of the first in the city to have such technology.

He didn’t have a card to open the gate, so he stuck the convention card into the hospital gate machine. He was surprised when it opened. Apparently, the data on those cards was very, very basic.

It would be another year before the magnetic stripe credit card was invented.

In 1969, Forrest Parry, an IBM engineer, had the idea of securing a piece of magnetic tape, the predominant storage medium at the time, to a plastic card base. He became frustrated because every adhesive he tried produced unacceptable results. The tape strip either warped or its characteristics were affected by the adhesive, rendering the tape strip unreadable.

After a frustrating day in the lab trying to find the right adhesive, he came home with several pieces of magnetic tape and several plastic cards. As he walked in the door at home, his wife Dorothea was ironing clothing. When he explained the source of his frustration: inability to get the tape to “stick” to the plastic in a way that would work, she suggested he use the iron to melt the stripe on. He tried it, and it worked.

The heat of the iron was just high enough to bond the tape to the card.

The credit card was soon invented.

Life got far more difficult after that.